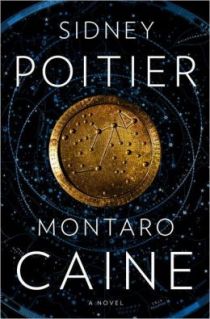 Montaro Caine by:Sidney Poitier
A baby is born with a coin in her hand. An orphan crafts a mysterious wooden object. The CEO of a large corporation finds himself under extraordinary pressure at work and at home. And on a remote hilltop on a Caribbean island, a medicine man seems to understand the meaning of all these events and to hold the key to the future. Montaro Caine, CEO of the Fitzer Corporation, is losing control of the company he built just as his teenage daughter is experiencing her own difficulties. At this moment of crisis, a man and woman appear at his office with a coin of unknown provenance, composed of a metal unknown on Earth. Montaro immediately recognizes it as the companion of a coin he analyzed as a graduate student working in a lab at MIT, which was later returned to its unidentified owner. The coin’s appearance draws the attention of scientists, collectors, financiers, and thieves, all of whom vie to get their hands on it, and Montaro himself hopes that the discovery of the coin will save his company. But the value of the coin lies not in its monetary worth but in its hold on the people who come into contact with it. These include the young woman who is not aware of the object that was found in her hand at birth; an old man who, as a boy, crafted a wooden compact as a gift for a young Montaro Caine; and the elusive healer Matthew Perch, who, from his hut on a small Caribbean island, knows precisely why these people have been brought together and what wisdom the coin imparts. In his first novel, the beloved actor and director Sidney Poitier takes us on a wild and unexpected adventure—from New York to Europe to the Caribbean and beyond. The novel offers Poitier’s heartfelt message about the potential each of us has within ourselves, and about being open to the possibility that there are mysteries in the universe, and here on Earth, far greater than we can imagine. An enthralling journey into the magic of existence, Montaro Caine is a radiant debut from an American legend.

A House Divided by: Kimberla Lawson Roby
Life is close to perfect for the Reverend Curtis Black and his wife, Charlotte—except their son Matthew and his girlfriend, Racquel, are about to become parents at the tender age of eighteen. Even though Curtis and Charlotte wish Matthew could focus on Harvard instead of fatherhood, they are determined to welcome their new grandson with open arms. But for Charlotte, welcoming her future in-laws is another story. Try as she might, Charlotte can’t stand Racquel’s mother, Vanessa—and the feeling appears to be mutual.
When the tension between Charlotte and Vanessa finally erupts, the stress sends an already-fragile Racquel into early labor. Everyone is quick to blame Charlotte, including Matthew and Curtis. That her own husband would side with someone else infuriates Charlotte and strains the relationship they’ve only recently been able to repair. Her one ally is Racquel’s father, but that brings problems of its own.
While Charlotte schemes against Vanessa, Curtis is consumed with his own concerns about Deliverance Outreach. A mysterious figure from his past has been sending Curtis cryptic messages threatening to take away Curtis’s coveted position as senior pastor and destroy everything he has worked so hard for. But who could hate Curtis that much? And how can he fight an enemy he can’t even name?
Times of trouble are descending upon the Black family in more ways than one. Will they be able to overcome their challenges and stand together against someone who could take it all away? Or is the Black family finally out of miracles?

Ask Wendy by: Wendy Williams
Go ahead . . . ask her anything
Over the radio and now on her popular TV talk show, Wendy Williams has always been approached for her blunt, in-your-face words of advice. How’s she doin’? “Ask Wendy” has become more than just a fan-favorite TV segment; it’s her calling card. Wendy has helped her viewers cope with everything from backstabbing girlfriends and deadbeat boyfriends to crazy mothers-in-law and jealous coworkers. Fans trust Wendy, even when her advice is tough to hear. She’s earned her reputation as “the friend in your head.”
On TV Wendy only has a few minutes to respond to each audience member, but in Ask Wendyshe goes deeper, answering questions sourced from viewers across the country. No question is off-limits and no situation is too outrageous for her to take on. Wendy shoots straight from those womanly hips of hers to help you manage all the crazy that comes into your life— keepin’ it real by drawing on the personal experiences that have shaped her unique perspective. Wendy reveals never-before shared intimate secrets about struggling with weight, navigating rough times in her marriage, and learning to accept herself. Along with the usual girlfriend, boyfriend, and family drama, Wendy straight-talks on topics like style, body image, and office etiquette, and of course she tackles your wildest sex questions. If you’ve dealt with it, Wendy has a solution for it.
Filled with fun personality quizzes, Wendy’s laugh-out-loud anecdotes, and tons of spot-on advice, Ask Wendy will help readers to end the drama in their lives.

A stunning tale about the deeply entrenched conflicts between a white mother and her biracial daughter.
Mama’s Child is story of an idealistic young white woman who travelled to the American South as a civil rights worker, fell in love with an African American man, and started a family in San Francisco, where the more liberal city embraced them—except when it didn’t. They raise a son and daughter, but the tensions surrounding them have a negative impact on their marriage, and they divorce when their children are still young. For their biracial daughter, this split further destabilizes her already challenged sense of self—“Am I black or white?” she must ask herself, “Where do I belong?” Is she her father’s daughter alone?
As the years pass, the chasm between them widens, even as the mother attempts to hold on to the emotional chord that binds them. It isn’t until the daughter, Ruby, herself becomes a wife and mother that she begins to develop compassion and understanding for the many ways that her own mother’s love transcended race and questions of identity.